My Generation: Young Writers from the Republic of Moldova

Italian novelist Elena Ferrante declared in an interview that a book is the product of two communities: the community of contemporary and classical writers, who have contributed to the tradition on which an author builds their style, and the immediate community, the group gathered around the author, the one whose experiences they transpose on paper or on the screen.

Moldova’s young writers are, linguistically and socially, very much part of the Romanian literary community, especially due to social media, the Romanian book market and literary events that bring together writers from both sides of the river Prut.

In poetry in particcular, this community has been shaped by summer schools and cenacles — a Romanian tradition whereby groups of young people that meet regularly in order to read and exchange feedback on their writing, under the guidance of recognised writers. Through his summer school at Râșca, Romania, as well as private conversations, the Romanian poet Adrian Urmanov had a formative influence on the Chișinău-based poet Hose Pablo and poet and philosopher Alex Cosmescu, who applies the principles of phenomenology to his verse on quotidian experiences, and Andrei Gamarț, currently based in Bucharest and working as a visual artist and graphic designer. These poets were part of the group Human Zone and, together with other writers, such as Aurelia Borzin, who edited the literary magazine Clipa/Moment, they took part in the Literary Club, organised by Dumitru Crudu and Nicolae Popa in the Moldovan capital. After the Literary Club, Crudu also organised the cenacles Vlad Ioviță and New Barbarians/Noii Barbari, as well as summer schools in Orheiul Vechi, where I met my peers: Ion Buzu, Victor Țvetov, whose recurrent (but not exclusive) theme — like in the case of Hose Pablo — is precarity, Cristina Dicusar, who is assering herself both as a poet and a literary critic commenting on the work of writers of her generation, poets and short story writers Irina Bruma and Ana Donțu, poet Anatol Grosu, all three of them members of the cenacle New Zone/ Zona Nouă in Sibiu, led by the poet Radu Vancu, Carolina Vozian, who continued her formation and activity within the Literatură și Feminism/ Literature and Feminism group in Bucharest. Today, two cenacles are active: Dumitru Crudu’s and Republica, by Moni Stănilă, being attended by the more intimist, confessional poets Veronica Ștefăneț, Anastasia Palii, Artur Cojocaru, Artiom Oleacu, Augustina Visan or Rodica Gotca, or Dan Negară, who mixes impressions of life in the countryside with signs of modernity. Aura Maru, who has recently completed her PhD at the prestigious American Berkeley University, was guided by Emilian Galaicu-Păun. Following literary studies in Brașov, Romania, Dumitru Fanfarov mixes rap music with political poetry. Cătălina Bălan, Elena Chilari are other Bessarabian poets now living in Romania. Ronin Terente, meanwhile, is active in the sphere of poetry performance.

The work of many of these poets has been pulished in generational anthologies: Cine nu e mângâiat nu există. Antologia generației 2000/ That Who Is Not Caressed Does Not Exist. The Anthology of the Generation 2000, (Cartier Publishing House, 2021) coordinated by Alex Cosmescu and Anastasia Gavrilovici, Antologie de Poezie Tânără din Basarabia/ The Anthology of Young Poetry from Bessarabia (Arc, 2020) or Poezia BASA / BASA Poetry (Arc, 2019), coordinated by Lucia Țurcanu.

Cenacles appear to be very fertile for poetry, while prose writing seems to require more stubborness, discipline and solo time.

Author of a very authentic and moving novel, Câinele de bronz/ The Bronze Dog, Emanuela Iurkin is one of the most interesting writers of our generation, along with Alexandru Bordian, who takes literary experiment and the absurd back into contemporary political and historical literary fiction through his novels, Casa mai multor primăveri/ The House of Several Springs and Casa Inglesi/ The Inglesi House, Valentina Șcerbani, with her poetic novel Orașul promis/The Promised City, Irina Bruma, in her millimetrically weighed short story collection (that can also be read like a novel), Perfect nemulțumită/ Perfectly discontent, Dinu Guțu with Intervenția/ The Intervention, a novel about ultras, and Perestroika Boys, a fictionalised account of the Chișinău of the years 2000, Sașa Zare (pseudonym) with her queer novel Dezrădăcinare/ Uprooting.

But you can make your own mind from the literary extracts below:

now I have to cut it all. direly. fear vanishes if you think of something else. then, fear gets upset and becomes smaller and smaller and leaves and it almost becomes human as it fades away – but then it keeps coming back every time I start to be clear and bright on the inside and then I ruin it all – I only need a small place somewhere, on the edge of a boardwalk, to sit down, look down and see all things equal –
Alex Cosmescu, Un spațiu blând, care mă primește cum m-ar îmbrățișa/ A Gentle Space That Welcomes Me As If It’s Embracing Me, Cartier Publishing House, 2013, 2017
my fame’s not coming in, why all applaud when a book is released, where is my fame, I wonder. I work in a supermarket 14 hours a day, but I don’t see the clients walk in to take pictures with me
Hose Pablo, Hype, Paralela 45 Publishing House, 2021 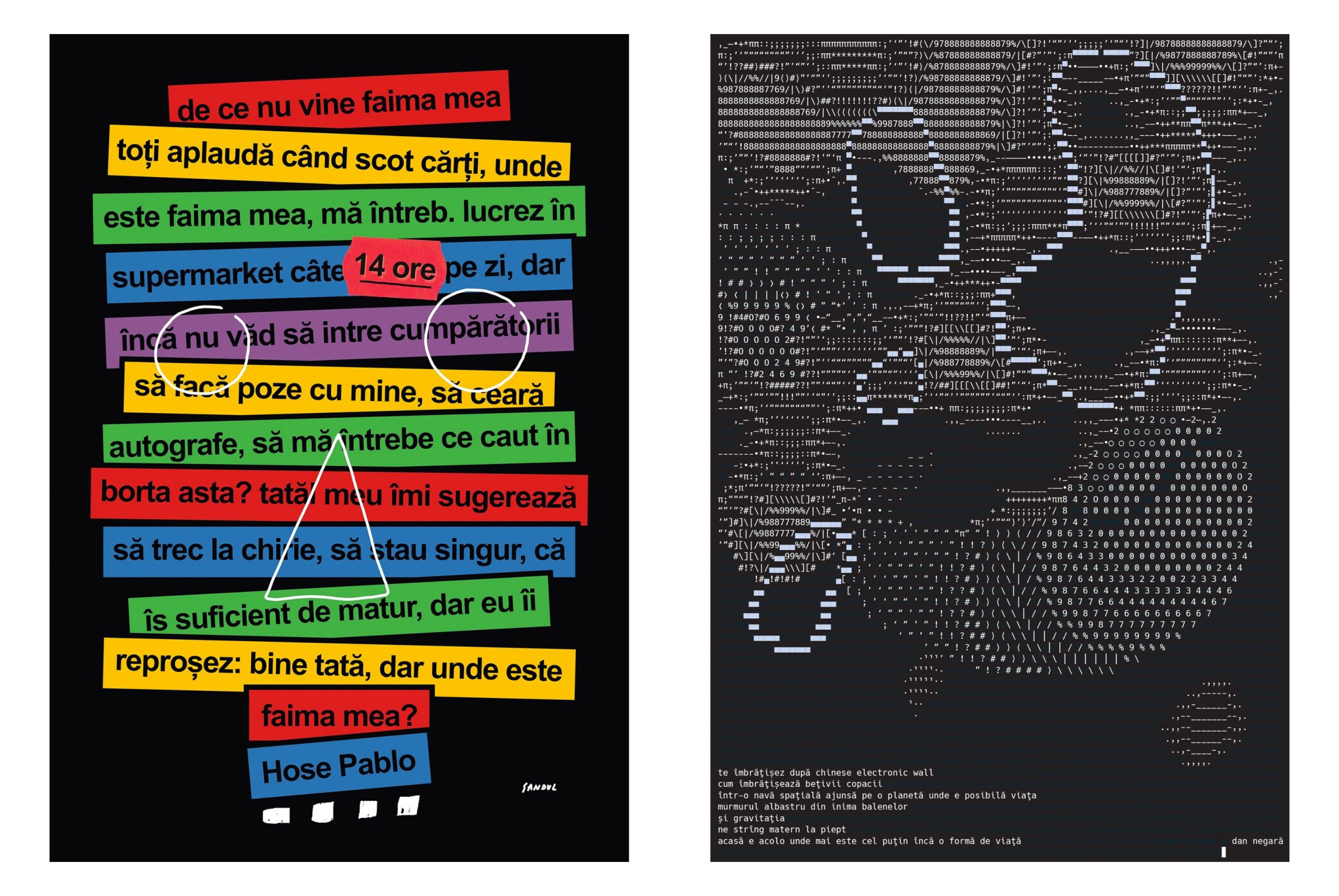 The dust layer on the pile of glamour magazines, the democratic political leader smiles at me from the cover, hugging his teenage daughter, laughing her head of. A tender family scene. Real wrinkles, a little Photoshop to impress. Signs of joy are real when leaders pose next to those they love. This is the rule that works. From behind the window, the workers are installing, dog-doglike, the cobble stones that will last until the first rainfalls. They take puffs of their cigarettes but the butts won’t keep them warm. Neither the caffeine overdose, nor the shots, nor the famous lines from worthy books or films. As they speak to each other, the steam from their mouth, mixed with the cigarette smoke, dissipates, like my thoughts about you. They succeed each other, without pause. Last night’s frost has reclined the chrysantemums at the entrance, a gesture of forced submission. There’s still a long time until snowfall. It seems like quietude would be there. That’s impossible to know. So we procrastinate around this or that illusion.
Emanuela Iurkin, Câinele de bronz/ The Bronze Dog, Cartier Publishing House, 2019
I was reading something, it was about 3.17 am, a certain chapter called love quarantine and my father walks into the room, pulls me to the side and whispers to me: „another hen, gutted, dead, in a sack in the barn, mouth shut about it, it’s been stiff for 2 days”.
Ion Buzu, Echinox Magazine, 2012
After having clipped her nails, Maria anointed her hands with perfume. Then, one thing after another, she closed the yellow curtains and turned on the lights, just to do the same thing again a bit later. She fears poverty, mother would have noticed, all do, it’s in their blood. Things dissolved around her, colours mixed up with black, mirrors broke into tens and tens of pieces, water was falling over the ceilings, over mountain peaks, over bridges, over towns, over fingers. Water spilled over, helter-skelter, rolling down roaring. Water spilled over, helter-skelter, rolling down roaring. Water spilled over, helter-skelter, rolling down roaring. Water washed everything with it. It washed memory. It washed memories.
Valentina Șcerbani, Orașul promis/ Promised City, Tracus Arte Publishing House, 2019
Up to this moment, all of my mother’s prophecies came true. Wearing such a long fringe will make you weak sighted and you’ll wear glasses all you life! If you will go on being so bitchy and critical towards everyone, God will punish you and you’ll find yourself with a husband who’s even more black-mouthed than you are! The remaining prophecy to confirm is her last one, something she told after every argument, when she felt like she had to capitulate, but not before another sting: I wish you nothing more than for you to have a daughter just like yourself! Maybe this is precisely the reason why she keeps postponing having children of her own.
Irina Bruma, Perfect nemulțumită/ Perfectly discontent, Cartier Publishing House, 2022

Ana Donţu, Cadrul 25, Max Blecher Publishing House, 2015
„Jan Krasovski lived in another city. He had a clean flat there. His parents went to concerts wearing clean, groomed clothes. I met them on the bus. They spoke to me politely. The house you move into feels what diseases you bear inside of you. The house you sleep in is a monster caressing your bones. The house you drink in makes you raise the flag, just like it did to the madman who lived there before you. The house you don’t love in poisons itself and kills. Slowly. Slowly. It swallows you. And if you don’t feed your house with sugar, it fills your mouth with salt. The house that suprises you naked, maimed, irritated, sees your anguish, your disheveled hair, your rough nails. If the house photographed your grimaces, you’d discover the face of a criminal. The house measures your fever and guards your alert sleep. The house decides when to make you blind and poor. The house knows how long your youth will be. The house, some day, decides to die and drowns you in Porto marinade.”
Casa mai multor primăveri/ The House of Several Springs, by Alexandru Bordian, Cartier Publishing House, 2022
she shook Artiom so strongly that little artiom fell out of the pocket little artiom hurt himself against the corner of the table little artiom hurt himself against the iron foot the floor Big Artiom instantly felt all the pains of the 3 commotions little artiom wipes the sweat of his forehead
Artiom Oleacu, poem published on the web platform Noii Barbari/New Barbarians)
Touched by fright, we lately drink in our homes. Crammed in the Soviet kitchen, we spread the canned pumpkin onto our bread, this is what it’s like when you’re born in Europe’s poorest country- you fill your gut with whatever you’ve got, so you feel there’s no room left for the hunger.
Ce vine de la oameni ne lasă indiferenți/ What Comes from People Leaves Us Indifferent, by Victor Țvetov, Euphorion Magazine, 2017