New Trends in Contemporary Music in the Republic of Moldova

Just like in all fields of culture, the music field also experienced an evolution of styles and genres in the Republic of Moldova. Since the 90’s, however, there has been an increased interest in local folklore; contemporary musicians return to the old musical schemes, resume certain motifs, folk arrangements or even reinterpret entire songs.

The initiators of this new musical tradition in the Republic of Moldova were the members of the band “Trigon“: Anatol Ștefăneț, Sergiu Testemiţeanu and Oleg Baltaga. Since they created the band, in 1992, up until now, they enjoy a great popularity both inside the country and abroad. Two years after their founding, they recorded their first album, “Moldovan Wedding in Jazz” (“Nunta Jazz Moldovenească”), in France. The album was awarded with the “Grand Prix du Disque”, it became very popular in Europe and was designated as best CD of the year by the French Academy of Arts “Charles Cros”. Their second album– “Oglinda/ Mirror” was recorded in Germany, being very successful there, in particular at the Hamburg Jazz Festival in 1998. Germany is, in fact, the country where the band returns most often. Other recordings, produced in the Republic of Moldova and in Romania, include: “The Voice of the Earth” and “Seven Steps”. At the moment, the band’s composition has changed and consists of Anatol Ștefăneț, violin, Vali Boghean – saxophone, trumpet, flute, caval, bass guitar, vocals, Dan Bruma – guitar, Gari Tverdohleb – drums, percussion, xylophone. Revisiting our folklore, combining it with jazz but also with rock, and having caught on to audiences around the world, they were invited to play on stages in Bulgaria, Romania, Norway, Russia, Lithuania, Italy, Spain, Denmark, Germany, Holland, Belgium, England, Japan, Poland, New Zealand, Greece, Switzerland, Canada, etc.
Their musical compositions were aired by the most listened to European radio stations, including Radio Free Europe; BBC, London; Voice of America, Washington. 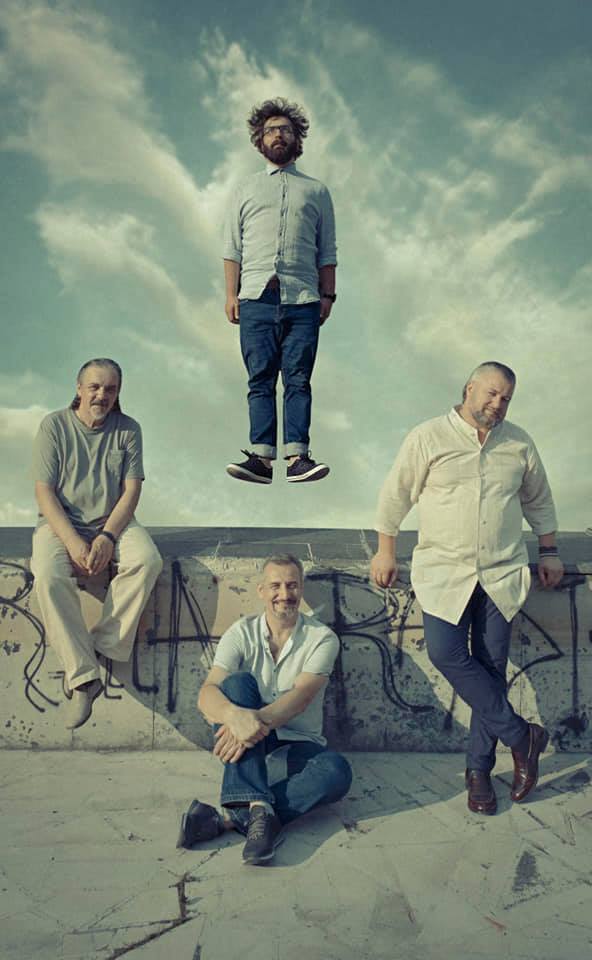 The band Zdob și Zdub masterfully combine elements of popular music with, in this case, hardcore. In 1994, the members gathered in basements to improvise and rehearse for their performances in small pubs and clubs. Back then, they were playing rock and punk, and they were called “The Noise.”  Later on, they called themselves “Santa Maria” and appeared at several festivals under this titulature. When Igor Dînga became their producer, he suggested yet another name change. That’s when they chose “Zdob și Zdub”, a name that reminds of the sound of the drums.  The first recorded disc is completely disconnected from any form of popular music tradition. The taste for this combination appears in 1998. In addition to combining musical motifs, they also sang live with folklore performers, with artists such as Surorile Osoianu and Vasile Dinu, making fusions between rock and folk.  Since 1998, “Zdob si Zdub”, just like “Trigon”, enjoy huge success all over the world, frequently appearing in Germany, in concerts of Romanian ethno music, as well as in Denmark, Hungary, Serbia, Belgium, Switzerland, Germany, France, the Ukraine, Poland, Romania, the Netherlands and Russia.  They were also opened concerts of world-renowned bands and artists including: Linkin Park, Red Hot Chili Peppers, The Garbage, Emir Kusturica & No Smoking Orchestra, Biohazard, Soulfly, Fun Lovin’ Criminals,  Rollins Band.
The band has represented Moldova at the Eurovision contest 3 times: in 2005, with the song “Boonika bate doba/Grandma Beats the Drum” (6th place), in 2011, with the song “So Lucky”, (12th place), and in 2022, with the song “The Train/Trenulețul”, a musical composition devised together with “Advahov Brothers/Frații Advahov” (7th place).  Over the years they have released several albums, including: “Moldovan Hardcore/ Hardcore Moldovenesc”, “Tabăra Noastră/ Our Camp” “Zdubii bateţi tare/ Big Beat Mix “, “450 de oi/ 450 Sheep” etc.
The members of the group are: Iagupov Roman – vocals; Mihi Gîncu – bass guitar; Sviatoslav Staruş – guitar; Andrei Cebotari – drums;  Valerii Mazîlu − trumpet, bagpipe;  Victor Dandeș − trombone, popular instruments. 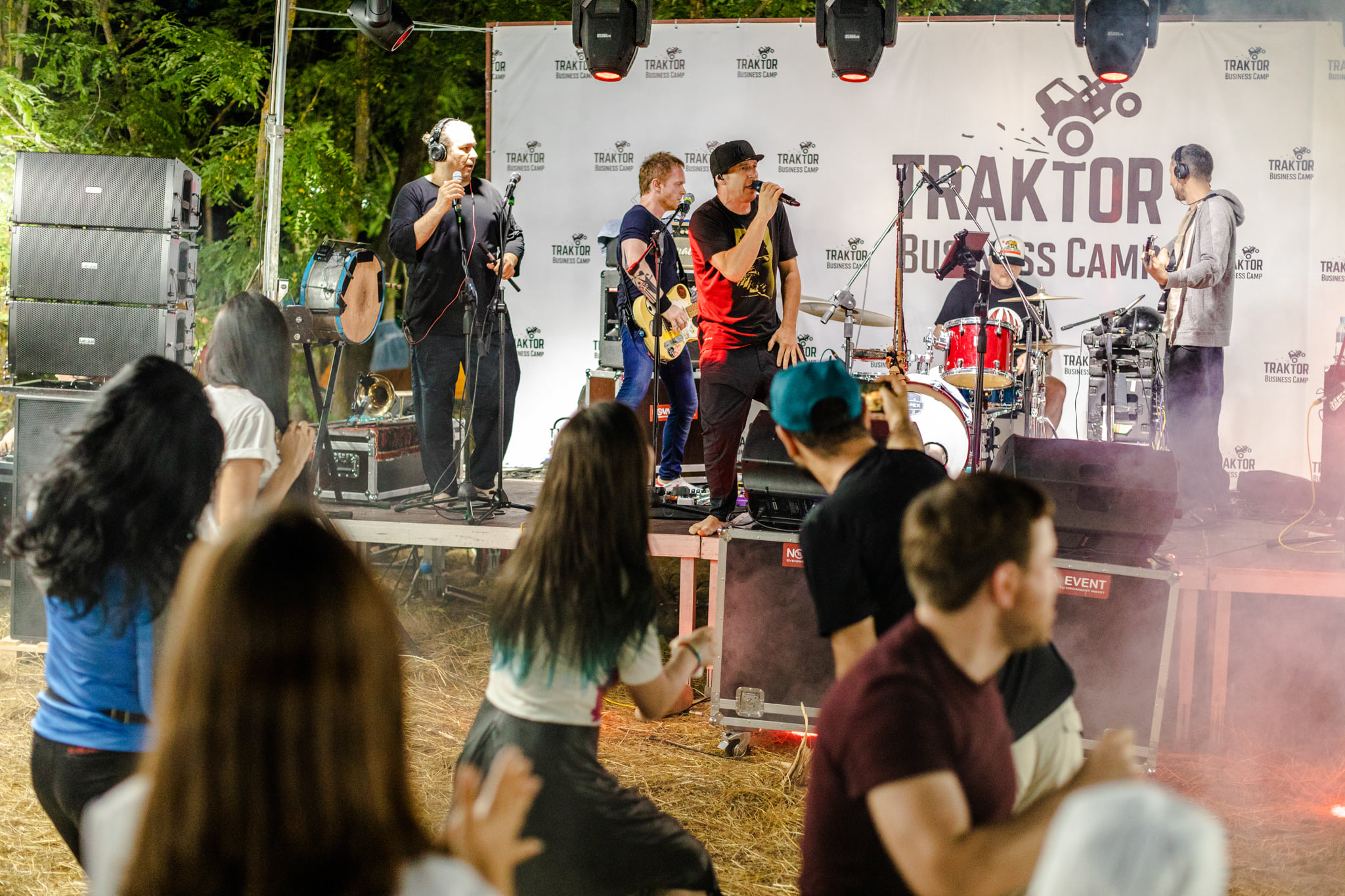 Alex Calancea is a producer, composer and bass guitarist from Moldova, passionate about folklore and about mixing musical genres.
After graduating from the Chișinău Conservatory, he made several tours around the world with a jazz fusion project. He launched a pop rock project, collaborating with major Los Angeles producers, including Jack Joseph Puig. Back home, he created his own band – “Alex Calancea Band” – a project that becomes one of the most representative for music in the Republic of Moldova. He honors the great artists of the Golden Age in concerts like: “Remembrance of Love”, “Alex Calancea and Friends” and also produces a documentary film – ” Bucurie de Noroc la Orizont de Plai/ Happy for Luck at the Horizon of the Sweet Land “.
After these achievements, he devotes himself to the authentic folklore of the Republic of Moldova, having many collaborations with Orchestra Lăutarii, The Advahov Brothers’ Orchestra and with a Romanian symphonic orchestra. His first album”Basul Capricios/ The Whimsical Bass”, a fusion of influences from funk, folk, classical and jazz centered around his bass guitar, was recorded in 2016. At the same time, he also founded the pop-rock project “RUPT” and, at the same time, he became the producer of several artists in the country. “Lupii lui Calancea/ Calancea’s Wolves” (2017) is a musical project inspired by the ballads and stories of outlawry translated to contemporary rhythms, combined with folklore motifs. “Calancea’s Wolves” revives the traditions of the country in such albums as “Poveste de iarnă/Winter Story”, digging into the past and bringing back long-forgotten songs, either in original or in reinterpreted versions. Two such examples are ” Fiu de dac, fiu de zeiță /Son of a Dacian, son of a Goddess” or ” Purtata fetele de la Căpâlna/ The Girls from Căpâlna” (a girl’s village gathering song and dance). Although they brought many modern nuances, The Wolves guarded this meaning, even in the video of the song. Calancea continues in this project the fusion with notorious performers of folklore; whenever he performs concerts with the Lăutarii lui Botgros/ Botgros’ Fiddlers or the Oșoianu Sisters, he reconnects the contemporaneity and origins. Alex Calancea founded a festival aiming at the preservation and promotion of these traditions: “Festivalul Lupilor/ Wolves’ Festival” with a section called namely “Origins”, dedicated to the ancestral tradition, a quest of discovery and, to a certain extent, modernizing. “Inimă sălbatică/Wild Heart” (2022) in their first album. The Wolves have numerous concerts both in the country and in Romania. 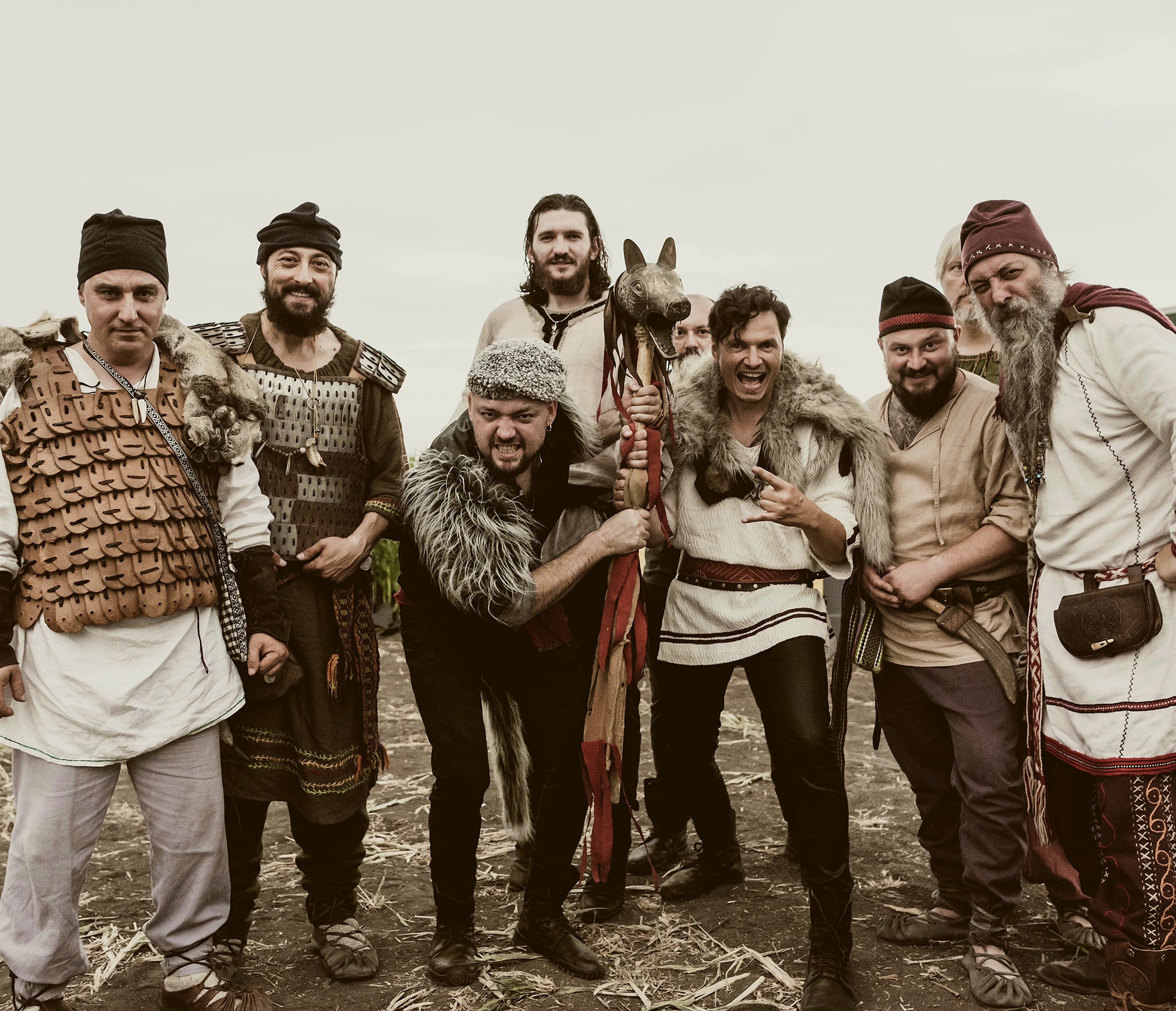 Via Dacă is a relatively new musical project in the Republic of Moldova, founded in 2017. From the very beginning they had a distinctive style, combining in an absolutely unique way folklore and mythology, approaching various motifs and themes. Feeding on the deep meanings of the fairy tale, Via Dacă set out to bring back the transcendental vibration experienced by our ancestors. Their music combines folklore, caroling, folk poetry, enchantment, indie rock, alternative and incantation. What they pursue most is harmony. All the members of the band confessed, in an interview for “ea.md”, that they liked old music. As for their pieces, they feel that they would not be able to put them in a certain frame, as they are very different from each other. The songs we think of when we say Via Dacă are: “Pădure Verde/ Green Forest”, “Și dacă/ And if…”, “Paparude”, always a fascinating way of mysteriously melting the sounds of voice instruments. Each note speaks about the passion for ancestral music, each note starts from an ancient one, that is why it touches the most sensitive strings of the soul of the listeners. Iulia Panici said in an interview: “The folklore and mythology of the Carpathian space is part of our DNA, it is the channel through which we connect to the wisdom of our ancestors, to nature, to the ancient and primal self within us.” Folklore is their home, their primary source of inspiration. Right from the first year of its appearance, the band managed to perform in most of the important music festivals in Moldova. Concerts abroad – in Canada and Romania followed shortly. The band is currently working on an album.
The band members are: Iulia Panici – vocals; Sandu Cordonean – keyboards, guitar; Vitalie Kolț – bass guitar, vocals; Iulian Ursu – cajon. 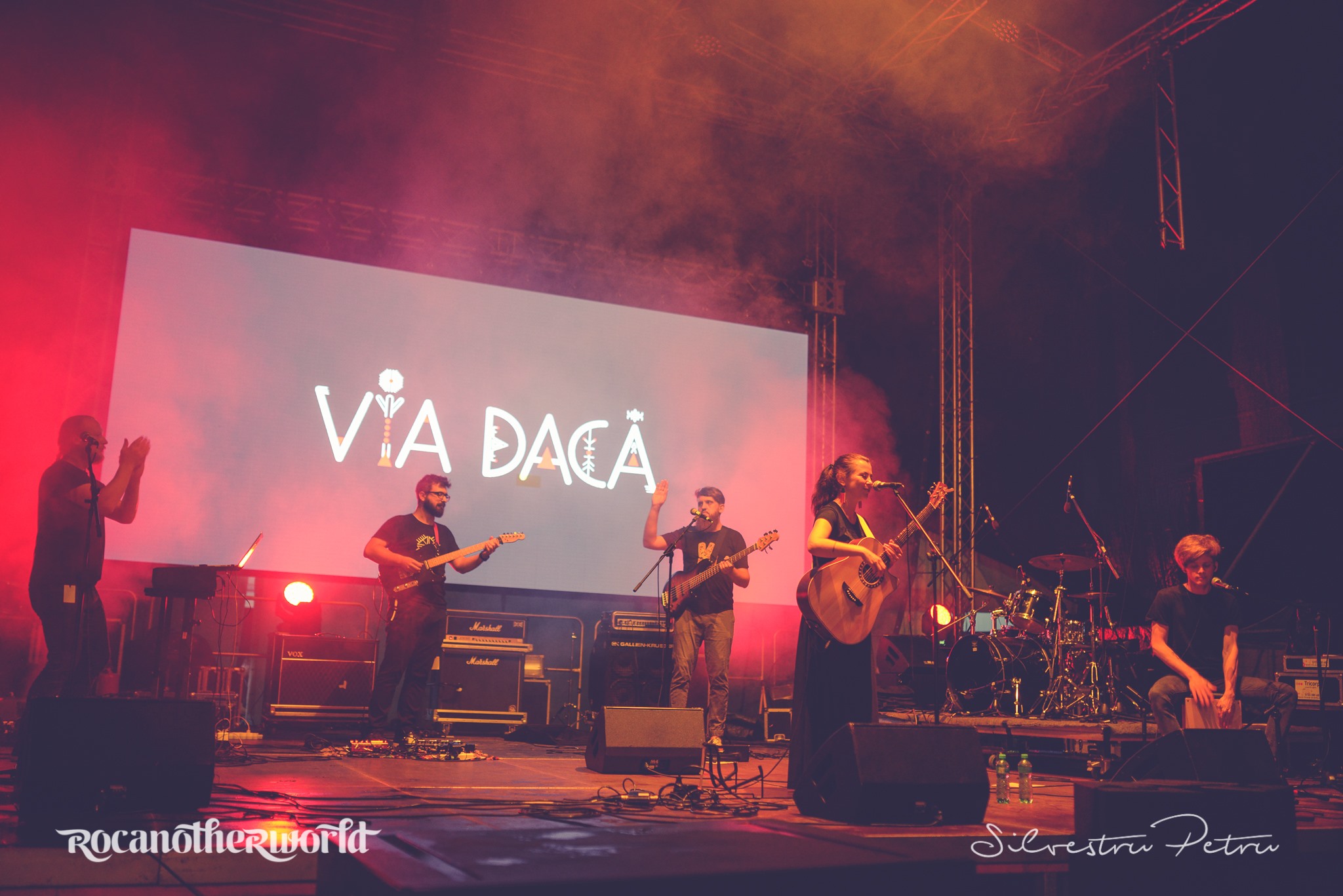 This phenomenon of returning to traditional musical motifs that we have witnessed for so many years now, speaks about the inexhaustible value of our local culture, of the ancestral elements present in the musical creations of these new, nationaly and internationally recognized music groups.