VALI BOGHEAN: “It’s a Fundamental Thing for An Artist – Going Out, to the World.”

Iulian Fruntașu: We are celebrating 30 years since the formation of the Trigon. It is an opportunity to talk about Moldovan jazz. You’re a member of the band, but you have your own project too. Anatol Ștefăneț managed to reconcile them all, and Trigon became a school attended by several musicians who have their own bands now. What has been your journey?

Vali Boghean: I joined Trigon in 2002, and my first album was “Autumn Visit”. Anatol found me and invited me. He trusted me, even though I didn’t have any higher education degree in music. I come from a family of musicians, but, at that time, that wasn’t enough. One had to have a degree, a diploma, talent mattered less to the musical guild, which could disband you without much difficulty. Nowadays, the environment got rather democratic: you got talent, you might be young, uneducation, you become a star on YouTube. Twenty years ago you had to have vision and trust, like Anatol, to give a hand to such a youngster. He didn’t care much about diplomas, he considered what you were doing when on stage. And that I wanted: I wanted to be a good musician, to be number one, to achieve virtuosity in handling multiple musical instruments. Anatol knew not only how to identify artistic potential, but also how to find the right role within the band, to value talents.
The important thing is the chemistry between people working on a project, admitting, first of all, that no one is perfect. We had moments when we argued, there were emotional outbursts– we’re human beings, after all–, but Trigon and it’s unique status in the music here were never shadowed, being a conceptualist and pioneering force, locally and regionally. 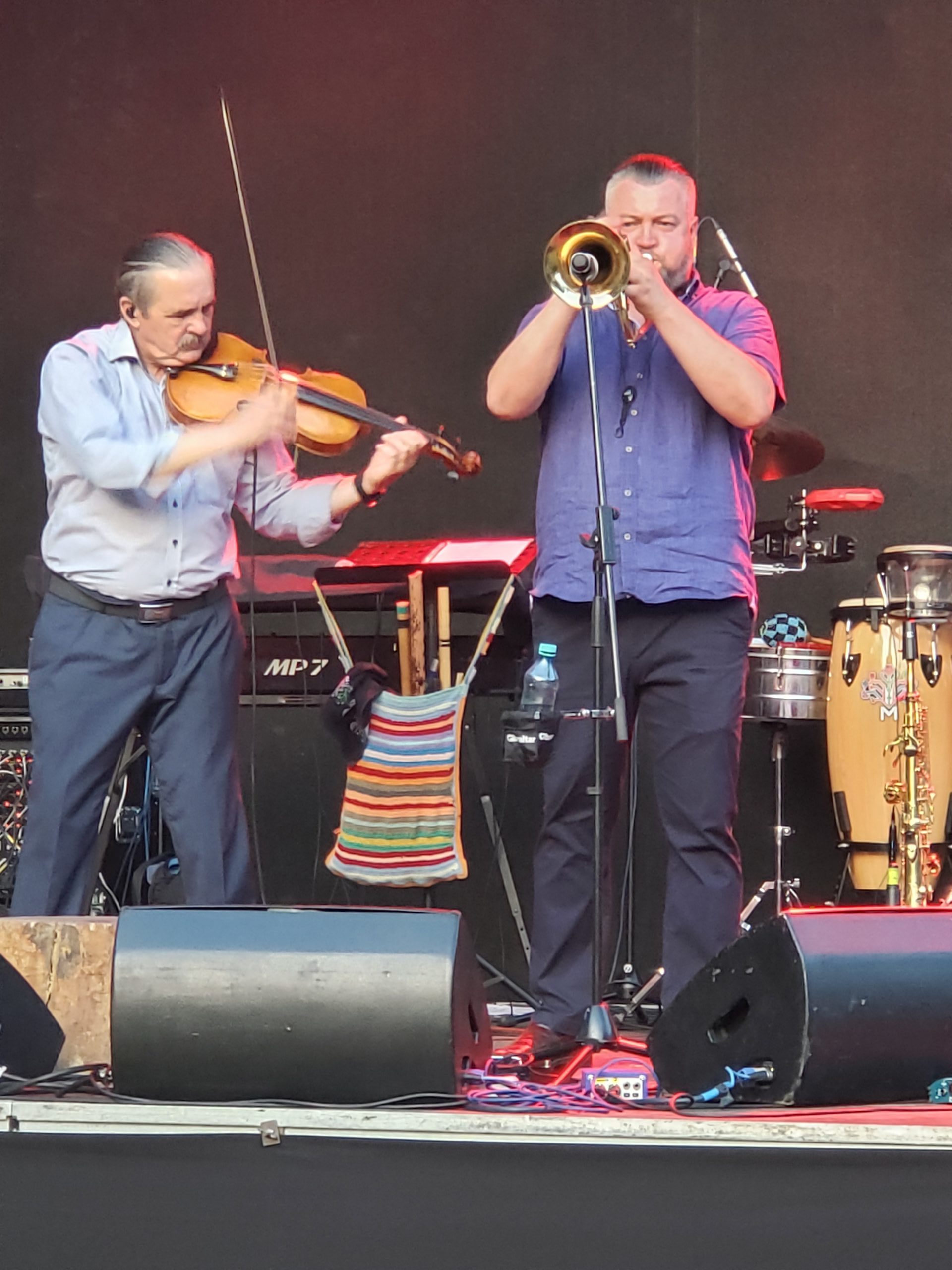 Iulian Fruntașu: And how did your integration into Trigon actually happen?

Vali Boghean: It was my opportunity to participate in the biggest festivals. This is a really important thing: because many musicians, unquestionably talented musicians, get stuck either at weddings or at the local scenes, without evolving in time. Then, the album “Autumn Visit” made me aware of the demands of creation on big stages. It’s a fundamental thing for an artist – going out, to the world.

Iulian Fruntașu: You’re still at Trigon, but you also have your band, there are similarties, and differences. How did you come to form your own band and what were the reasons?

Vali Boghean: Putting together another Trigon wasn’t fun, but we were talking about the “Autumn Visit” , we had invited a Crimean Tatar, Enver Izmailov for this album. Then I collaborated for two years with The Shin, a Georgian jazz fusion band created in Germany in 1998. Several musicians from different countries were involved in this project and it was a great experience for me. I could consider I got my master’s degree with this project.

Unquestionably, Trigon is fundamental, Trigon represented and continues to represent a necessary experience, also thanks to its connection to international jazz scenes. I wanted to develop my project not in counterposition, but in the idea of exploring some lesser-known areas beyond the natural boundaries Trigon had set over the years. It is a natural and dynamic coexistence of artists, and Anatol has always known how to integrate others. 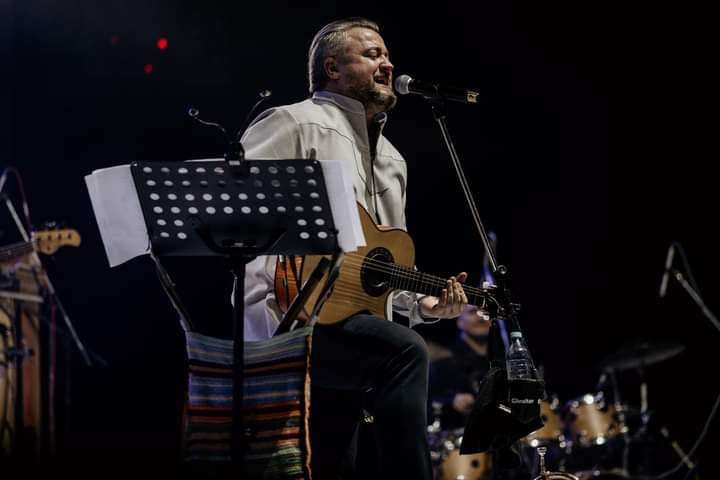 Iulian Fruntașu: What were the specific moments of your beginnings?

Vali Boghean: Coming from a family of musicians, I’ve been practicing music since ever and ever, but I only got to fusion after a certain period of experiment. I flirted with light music for a while. Until 2010 I tried different styles – fusion, Balkan, pop, I started to somehow stand out because I was doing it live, not using play-back, as most guys did at the time. This somehow protected me from being criticized for amalgamation of styles. That was my first hit: the audiences appreciated the emotion in the music, and it became clear what direction I should move in.

Iulian Fruntașu: And what is this? How do you define your style?

Vali Boghean: I don’t want to name the style. If I do, it becomes a label, it’s hard to get rid of that later on. It’s absolutely fundamental that music triggers emotions, and, depending on this desideratum, we can talk about authenticity. Authenticity cannot be mimicked. In fact, many musicians understand that people are increasingly interested in a multitude of styles and their fusion; one can no longer claim the attention of an audience, based on past merits, based on a purity of the style – one has to always innovate, to capture the attention of listeners, who are increasingly demanding, on the one hand, and marked by a deficit of attention due to social networks, on the other hand.
But it seems to me that people have developed a special sensibility lately and it is no longer enough to have a formal musical education and to perform a piece correctly. It would be like speaking grammatically correctly, but not conveying anything original. It’s important to be natural, authentic, emotional, in order to create the necessary connection. I think this is what we call talent, reaching beyond the ordinary practice of the craft.

Iulian Fruntașu: But the market is not well developed, as it is in the West…

Vali Boghean: Yes, that’s true, we do not have a culture of music agents, of impresarios, to support the development and reception of a musical product. I often have to take care of these on my own and it takes up too much of my time. I was lucky was to meet a fellow Moldovan citizen turned into a businessman with an office in Germany, an absolutely admirable person, who invested a significant amount in my band. Otherwise I would not have been able to keep my colleagues together, or we would have struggled and ended up singing on undesirable stages or in unwanted contexts. I hope to find that balance between art and financial independence, but art, unquestionably, takes precedence.

Iulian Fruntașu: But what does the audience look like to you?

Vali Boghean: To some extent it becomes more and more elevated, but at certain levels audiences become lazier, because we do not have a tradition related to critical thinking and individual effort. Our consumers are not very educated compared to Europeans, but we are seeing a change in the collective mindset and an increased level of skills – people, for example, consume more bottled wine (they drink less wine directly from the barrels), people travel more, visit museums and art galleries. It’s a trend that I hope will lead to the creation of a middle class, a curious social group, willing to invest in their own education, including musical education, education of the musical taste. But, in order to form this tradition of art consumption within our society, it is necessary to involve people who have the intellectual capacity to guide or at least to explain cultural phenomena and products: critics. Music, theatre, cinema, literature critics, who initiate debates and involve others in this absolutely necessary process of reflection.